Mounted Orienteering is something that I have been wanting to do for awhile now. It hasn't worked out  mostly due to time and distance limitations. There seem to be a fair number of them up at Tollgate, which is over an hours drive with a trailer.

The last ride of the year (Blue Mountain Mounted Orienteering) was held at Bennington Lake, on my own conditioning trails, so I knew I wanted to be sure to attend.  I tried to rally some of my friends to go with me but they already had other obligations for the day.

Other then the ride managers, Shannon Perkins and Karen Wilcox, I did not recognize a soul. I did not understand how that was possible since I have been a member of the local ladies riding club for a number of years and thought for sure I would see someone I knew to pair up with.  As it turns out, a lot of the entrants traveled over from other towns.

I thought my trailer stuck out but now seeing this photo I realize it was just camouflaged!

The nice thing about trying a ride like this for the first time is the discount. Only $5 to participate!

Karen had brought a compass for me to borrow and I was glad for that. There was a short orientation meeting and I thought I had everything figured out.  As I looked around I felt kind of out of place. Everyone else was riding Western, dressed in multiple layers, and it wasn't until I met my teammates that I even saw another grey horse! I was also one of the few with a helmet.

After the mandatory safety meeting they asked everyone to split up into groups so they could see what they had. They decided to put me on one team, then I got bumped over to another team. I was trying to learn names and keep things straight but it was tough! The team I settled into was a group of beginners, everyone new to the event except for one woman named Michelle. 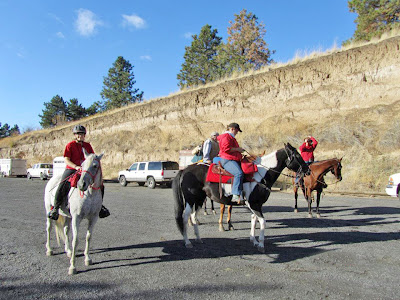 There were a couple of newbies in our group that seemed to know each other. Tracy was a nice woman on the black and white paint mare. After talking throughout the day it seemed like she would enjoy endurance riding. We had some nice chats and I enjoyed her company. 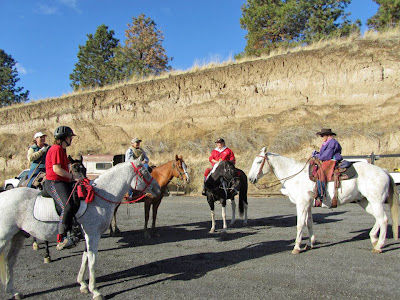 A small older woman on a big white horse (on the right in above photo) they called "Mom." I will be glad to see the results so I can try and put some names with the faces.

It's a shame I didn't take a camera because it would have been fun to have shots of the ladies working the stations, looking for clues and plates.

As we talked strategy in our group Michelle asked who could read a map. I told her I had limited experience with maps since I do endurance riding, and mostly I follow ribbons. She told me that was good enough and I would be the map reader.  One of the riders, I think it was Tracy, asked me about my saddle. It started one of my nicknames for the day "dressage saddle person." I was also "map-reader" and "endurance gal." It seemed that most of the ladies were having trouble remembering names.

When we were given our maps and clues at the start it took me a little bit to get my bearings. I ride these trails all the time but putting our location together with the map was a bit challenging! They thought we were starting with #8 and no matter how many times I told them that #8 was behind us on the other side of the parking lot they would disagree with me and make me really question myself. Michelle took her job as our leader a little too seriously and I found her to be a bit harsh at times.

While we did find the clues and plate for #3, we were really stumped on #2 and they were close together on the map. Part of the problem may have been that at the time I was not using my compass right. It wasn't until I asked for verification at our third station that I realized that and boy was I embarrassed!

The clues were not too tricky (aside from #2), but finding the plates were really difficult. When I talked to Karen about this after the ride she said that last year when they hosted a ride here the groups were done within an hour and they decided to make it a lot harder this year. As a beginner I would have liked it to have been a little easier to avoid a lot of the frustration that our group experienced. However I can also see how people who do this a lot and travel a ways would want the challenge.

For example, one plate was in a tree, and under a pine limb. So you had to be directly under the limb, looking straight up, to even see the plate! At that particular station I did see a familiar face, Dr Sarah Campbell, riding in another group.

As the ride progressed my map reading skills got a lot better and my confidence went up. My group expressed a lot of thanks after the ride for they would not have found a couple of the stations without my guidance. Score! Although I can't claim much in the way of finding plates. My count for the day was 1 out of 10 on discovery.

Towards the end we joined up with another group and that made for a lot of us going down the trail. Because we had spent so many hours out there looking for clues and plates I was ready to be done and wanted to do more trotting. We had done some trotting throughout the ride and our group seemed fine with it (We had briefly discussed riding speed before mounting up). We had a road crossing and I was out front so we walked until I thought we were all across (but I couldn't see the end). I heard someone say "we're through" and I gave another couple of minutes before picking up the trot. We were single file, with our group ahead of the other group. Then I heard some shouting, so pulled to a stop.  Once we were all able to gather together we discovered that a youth rider got stuck at the other side of the crossing and there had been some traffic so she got left behind. She was crying and quite upset. This is the same rider that I observed earlier (ahead of me for a bit) strategically holding her horse back so she could canter to catch up again multiple times. I felt badly that she was so upset, but why wasn't her sponsor with her? How did this happen?  That was just before our last station, so I directed most of their group on how to get back to the parking lot since they were ready to be done. One of their people stuck it out with us in searching for that last clue.

Beat the woman in the green jacket across the finish line!

At the finish was when my group realized that everyone in a group has to be across the finish line before the placement is recorded. We had all stuck together, but the other rider - all of her group had already made it in, we had to beat her to place ahead of them. It was silly but we all started trotting and trying to block the sole rider.

In conclusion, I would definitely do this again. However, I would want a team of people I normally ride with (friends) to be with me. It is always nice to meet new people and make new friends but going into it solo like I did opened it up to too many variables. Too large of a group, too big of a chance the horses won't get along, and riders will disagree on speed, etc. Also personality clashes. I think Michelle did a good job in teaching us a lot about the event, but I also found her a bit hard to take at times. Her horse was misbehaving a lot and she would shout and I was never sure if she was shouting at him or at one of us riders. None of the people in my group had ridden at Bennington before, so they were really relying on me to get them back to the parking lot. I felt like I couldn't have left early if I wanted to. And because the plates we so tough to find, we were out there all day long. I barely got home in time to shower and then take the kids to a birthday party they had been looking forward to.

Thank you Karen and Shannon for hosting the event. With pouring rain the night before, we all got very lucky with the weather! A bit of wind but overall nothing to complain about. I hope to do this again in 2013.
Posted by Shana at 11:51 AM

That sounds challenging for sure...I wouldnt mind going along for the ride to watch and see how it is done first before I actually committed myself.

Actually I would be happy just to get on a horse and ride down the trail again!

glad you tried it. i have been stuck in disagreeable groups before so i mostly rode alone until i found a couple of ladies that meshed with me, and we became a team. those plates that are directly above you on the underside of branches suck!

i think it's wrong to put beginners with other beginners. if you're new, you need an advanced rider to handle the tough aspects and make it enjoyable! i hope you get to try it again, with buddies, so you can get crazy and laugh the whole way: )