Headed for the mountains!

Heather has been itching to head for the hills. Real hills, not the little ones we usually ride on the roads. She thought that with all the miles I have put on Sinwaan, and with how far his fitness level has come the past couple of months, we were ready to tackle Cache Hollow with her.

When I first got Sinwaan he lived on the farm at the foot of Lincton Mountain. Cache Hollow road is a seasonal road with allowed use from April - November. Typically used by farmers, there is not much traffic. Most of it is rock or gravel and it is very primitive for cars, with little to no signage. This makes it great for riding on horseback. I remember starting his conditioning by riding 2 miles up and 2 miles back down that road every week. I thought we were really doing something. Even though 4 miles a week is really not much, the fact that we were going up and down a mountainside put a decent base on him and allowed us to place mid-pack that year in limited distance rides. 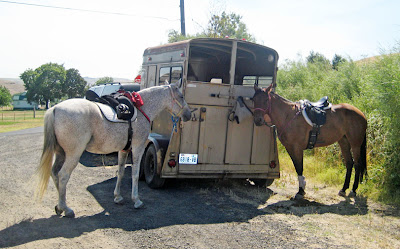 This year I am more serious, more driven, and know a little more about what I need to do. Heather and I planned out a ride that would take us up THE HILL on Cache Hollow, around on Kinnear and back down Lincton Mtn road, for a total of an 11 mile loop. 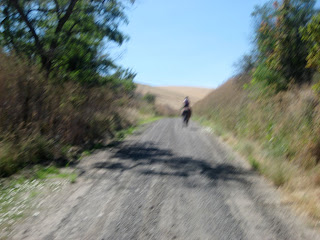 We started out at about 1300' and climbed up to 2200' at the top of THE HILL.  This shot proves only that I shouldn't try to take photos while we're trotting. 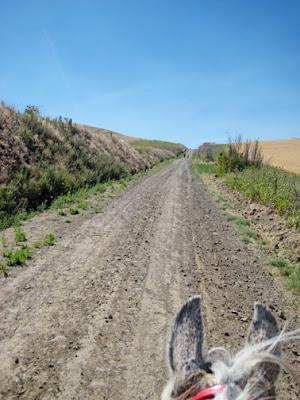 Sinwaan thought I must be kidding to not only expect him to carry me up THE HILL, but also to do most of it at a TROT. WHAT?! Ok, so he got a break half way, and did walk about half of the really steep section. Bunny went happily trotting all the way up to the top, took a short break, and then came back down to meet us and went trotting back up again! She is an animal! 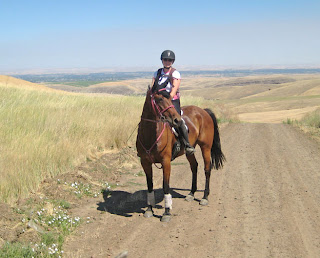 Once at the top of this monster hill, there is a beautiful view of the city in the valley. I am not entirely sure how much of it is Milton-Freewater and how much of it is Walla Walla, but it is a nice reward for all that hard work.  This photo is looking back in the direction that we climbed up. 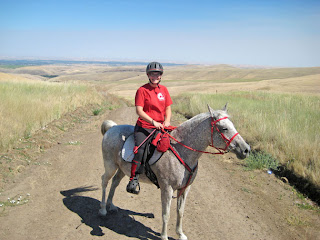 Sinwaan was pretty bushed after that climb and cocked his hind leg as soon as the opportunity presented itself. 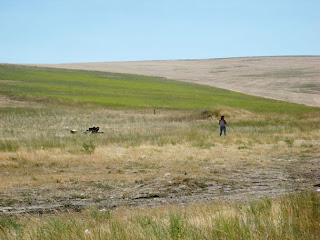 Frequently there are people shooting targets up there. Today was no exception. The lady was nice and asked if she was bothering the horses. I think due to the wind her gun didn't seem too loud. We didn't hang around there long anyway. We took a couple photos and moved on. 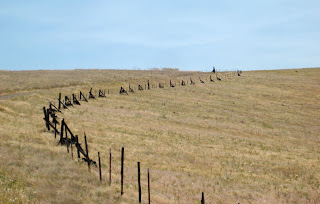 A short distance and the road splits. Head to the right and you will meet up with Coe Rd (Co 609) and if you stay on Kinnear it would end into Couse Creek Rd. I have not ever gone that direction but perhaps will be able to later in the season. We went left on Kinnear and this lovely third of the loop has exceptional views and decent footing. Bunny is a machine and she got a bit ahead of us there for a little bit. Heather and I had talked about it earlier and I did not discourage her from getting in all the work she could while we were up there. So she would fade into the distance, and then come back to us, a couple of times. Bunny IS a 50-mile horse. Sinwaan is in training. 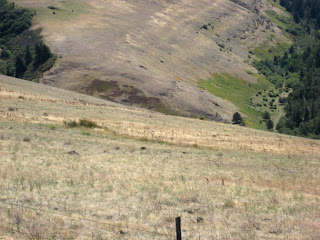 Sinwaan kept trying to pull over onto the grass. At first I thought he just wanted to eat. Then I thought maybe he was just tired. Then I thought maybe he needed to pee. FINALLY he did relieve himself and after that he was able to keep up his steady pace a lot better. In the above photo I had looked over and saw something move. At first I thought perhaps it was a fox but after watching it for a bit it seemed more like a coyote (dead center in the photo). It didn't see us for awhile but then once it did, it ran off down the hillside. Looking back behind us on this same hillside was a small herd of cattle. 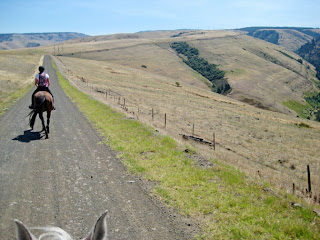 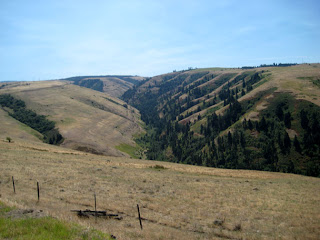 The weather was in the 80s and we had a strong breeze, it was a lovely day to be riding. At the highest point in our ride, we were at approx. 2900'. That is 1600' of climbing at about seven miles into the ride. 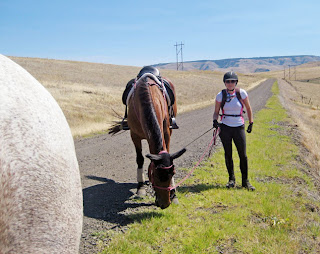 When we figured we had gone about half-way, we dismounted and gave the horses a break. They grazed a little on the sparse grasses, and we electrolyted them with some plain yogurt in a syringe. Sinwaan licked and chomped and seemed interested in that. He took it really well. This is something we have to start doing more often because on the longer, harder rides they need more e-lytes given to them to make up for all they are losing. 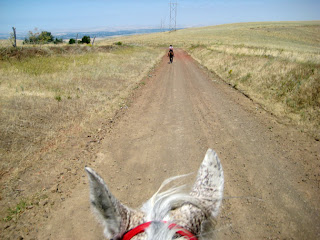 When we got to a point where I thought for sure we would have to cruise around another curve of the mountain before finding Lincton Mtn, there it was. You know you are there when you see the loading chute and holding pen for the cattle (7.5 miles in). I can't imagine driving a semi-truck up these roads to pick up cattle, but they do. We made the sharp left and headed up a short hill before it leveled out and then started going downhill (for the next four miles). That section of road is very deceiving because it looks smooth, with small rocks here and there, but when you start looking closer you realize there is a lot of rock embedded in the dirt. Somehow we managed to trot most of it and kept up with Bunny -for the most part- and I was very proud of my horse. He is not the best at downhills but he found his gear and just motored along. Maybe next time I could get a photo of the road surface. This time it was all I could do to stay balanced and trotting. 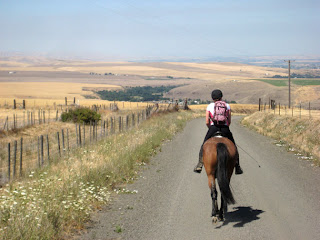 There were a lot of flowers blooming along Lincton Mtn road and the view was nice on the ride down. 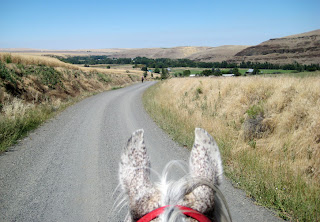 There is one homestead about 1 1/2 miles from the paved road, and from that point on the road is a nicely maintained gravel surface.  We only encountered two vehicles today, they both came up behind us on our way down Lincton Mtn. They were both polite and slowed way down to pass. 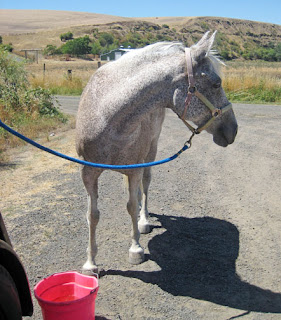 Once back down to the main paved road, it was .3 miles back to the trailer. Our total riding time (including the break half-way) was 1 hr 55 minutes. We were pleased with that since we had figured it would probably take about 2 hours. Heather had packed all kinds of goodies for both us and the horses. First we offered them water. Bunny drank some of hers down like a good athlete. Sinwaan kind of licked at his and looked around. 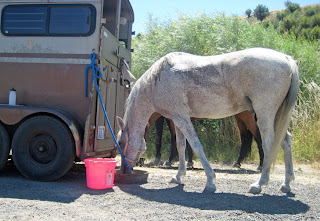 Then we offered them their mashes. Sinwaan thought that sounded pretty good and he licked the pan clean. After that we loaded up and took them home. Heather had made some peanut butter and honey sandwiches and sliced apples for us and it tasted so good!

I found a pretty good sized rock wedged into Sinwaan's left fore, so am hoping that doesn't result in a stone bruise or worse. He got a nice bath once home, with the royal treatment.

Even though he still looks pretty fat, his saddle is starting to fit better, and I see some new muscle definition on his chest behind his front legs. I have to work full time all next week so he will have some time off to recover from today.