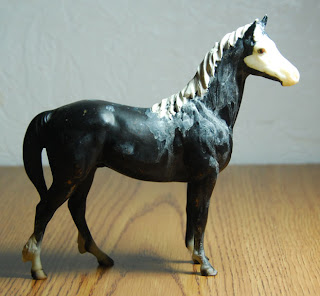 This doesn't really belong in Sinwaan's blog but I wasn't sure where else to put it. I am working on a model horse currently for a "Secret Santa" partner. It sounded like fun, so I signed up, and now here I am trying to do a portrait model. Yikes! I looked online for a week trying to find the right "body" horse to build on. I did not have any luck. I remembered that my mom had a model that might work so I stopped by tonight and bought it from her. This model was included in a "body box" of multiple models that needed to be repainted. Someone had even gone an extra step and added a new mane and 'feathers' to this one. 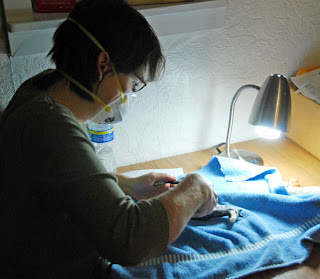 Well the mane was on the wrong side of the neck for my portrait model, so it had to come off. It's been awhile since I ran a dremel. Have to admit it was kind of fun.

The feathers had to come off too because they were positioned way too high on the rear legs. This model I am portraying does have some light feathers so I will have to add them back on with epoxy once I get it cleaned up. I also cut the tail away from the body while I was at it. I drilled out the ears and nostrils and even the mouth to some degree.

Then I heated the horse up with a heat gun so I could reposition parts of him. I wanted to bring the head & neck down a little to a more relaxed position. I also bent his back leg so it looked like he had that rear foot cocked and resting. 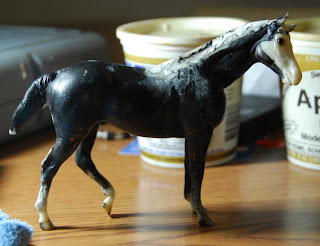 As you can see, the heat gun was not kind to him, it really changed his neck and now he does not look very realistic! I also moved his ears just a bit so they look a little more floppy, like a lazy gelding expression. 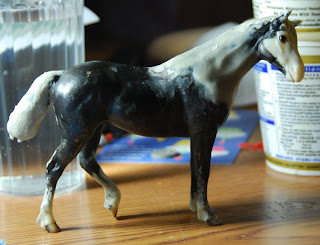 I added epoxy now and sculpted his neck. I was happy with it at the time, but looking at this photo and how the light/shadows are catching it, looks like I need to do some more work on the muscles to make it more realistic. I built up his head, making it more roman-nosed. I added feathers to all four feet and fixed the ear-tip that was missing. I had a wretched time with the tail and the mane, but I think the mane will be ok. The tail kept falling (gravity) as I had the model on it's side working on adding detail to the mane. By the time I got to it, the epoxy was hardening and would not stick together very well. So I am going to have to start over on that next time!

All in all it was a satisfying evening's work! I have a very limited amount of time to get this model done. Wish me luck!
Posted by Shana at 12:10 AM